General | To Students | To Companies 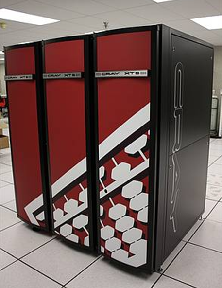 Materials such as molecules and bulks consist of electrons and nuclei, and the governing equation for the system has been already known as i.e., the Dirac equation formulated by Dirac in 1928. If the equation were solved exactly, chemical and physical properties of the system would be predicted before performing actual experiments in principle, which is one of ultimate goals in materials science. However, this is not possible except for very simple systems, since the computational cost for solving the equation in a numerically exact sense may scale as O(eN), where N is the number of electrons in a system. An efficient way for practically solving the equation, balancing the computational accuracy and efficiency, is the density functional theory (DFT) founded by Hohenberg and Kohn in 1964, and the Kohn-Sham equation developed by Kohn and Sham in 1965. 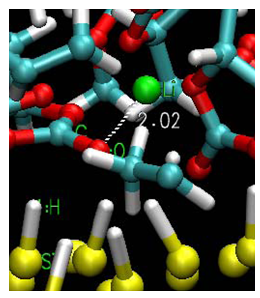 We aim to develop DFT in a practical sense to extend applicability of the theory to large-scale realistic systems including more than a few thousand atoms, and have succeeded to develop low-order scaling DFT methods including O(N) methods, implemented in the OpenMX (Open source package for Material eXplorer) software package, for the last ten years. With our continuous efforts we have been gradually able to address challenging and industrially very important problems in accordance with recent remarkable development of massively parallel computers, and reach better understanding of these complicated materials from first-principle's point of view. Especially, our research will cover the following methodological developments: and the following applications:

We are also interested in an interdisciplinary area briding computational science and information science to address an inverse problem on material design, while our activity towards the direction is still on the drawing board. 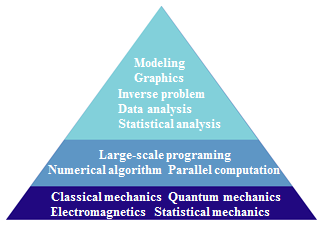