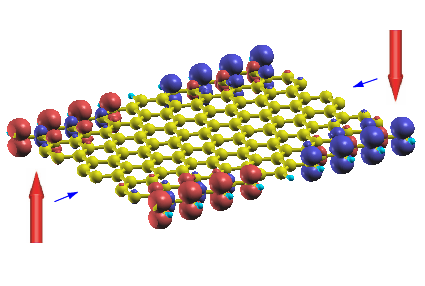 The graphene is an ideal monolayer material, and has been attracting much attention because of its peculiar electronic structure characterized by a Dirac dispersion in the band structure. The layer of graphane can be cut to form a graphene nanoribbon in such a way that the edge structure is called either zigzag-, armchair-, or chiral-edge. Especially, the zigzag graphene nanoribbon (ZGNR) is worthy of remark, because it possesses finite magnetic moments at the zigzag edges even though the edges are terminated by hydrogen atoms. We expect that ZGNR is a candidate material for spintronics devices, while so far most of promising materials in developing the devices have been found in ferromagnetic (FM) metals and FM semiconductors such as GaMnAs. As a demonstration of such a functionality of ZGNR, we predict by first principle calculations that an antiferromagnetic junction of ZGNR exhibits a dual spin filter effect under finite bias voltages [1]. Unlike conventional spin filter devices using half metallic materials, the up and down-spin electrons are unidirectionally filtered in the counter direction of the bias voltage, making the junction a dual spin filter. On the contrary, asymmetric ZGNRs do not exhibit such a spin filter effect. By analyzing Wannier functions and a tight-binding model, we clarify that an interplay between the spin polarized band structure of pi and pi* states near the Fermi level and decoupling of the interband hopping of the two states, arising from the symmetry of the wave functions, plays a crucial role in the effect. The research was conducted in collaboration with AIST and NIMS.